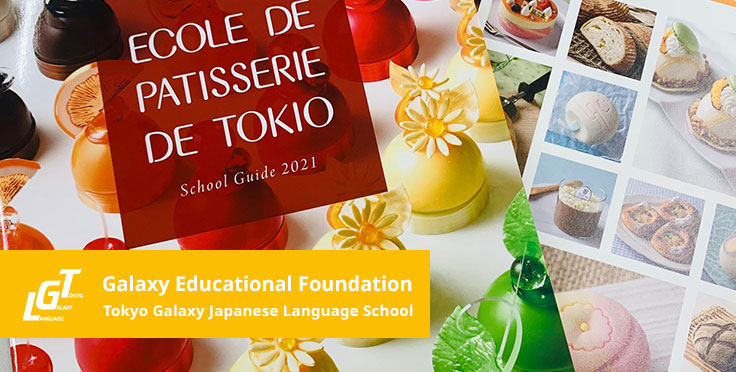 In mid-October, we were informed that all students of Tokyo Galaxy Japanese Language School who applied for Ecole de Patisserie de Tokio as special scholarship students of designated school passed the admission selection. Congratulations to all of you! And now, we would like to introduce an interview with Mr. Baeck, who passed the admission selection for the Bread-making Course of Ecole de Patisserie de Tokio. Mr. Baeck, who entered Tokyo Galaxy in January 2020, has been so earnest and enthusiastic about everything and many of our teachers were impressed by his such attitude.

Congratulations on your success. Would you tell us how you are feeling now?
I’ve been preparing so hard, so I’m relieved to see good results, but I don’t know anything about bread-making yet, so now I’m getting a little bit nervous about studying it.

Please tell us about your most memorable teacher at Tokyo Galaxy.
It is difficult to choose a particular someone, but I am especially grateful to Ms. Aida and Ms. Hashizume.
I started studying Japanese after coming to Japan, so I was placed in the lowest level class at enrollment. However, thanks to the support of Ms. Aida, I was able to advance to the Accelerated Learning Class from the next semester. I studied really hard, hoping to meet her expectations, and my Japanese improved considerably.
Ms. Hashizume speaks Korean, and she has always been helpful since the time when I couldn’t understand Japanese and even now, she lets me talk with her in Korean and she will give me advice so I could concentrate on studying without worrying about other things. To Korean students who are new to studying Japanese, I’d like to say you don’t have to worry at all because there is a teacher who is very fluent in Korean at Tokyo Galaxy Japanese Language School.

What was the key to your success?
Keeping my attendance rate, and the preparation I made for the interview test. Ecole de Patisserie de Tokio places more importance on attendance than other vocational schools. So I did not miss a single day and maintained an attendance rate of 100%.
The second thing was the interview test. I don’t know about the specific evaluation points of the interview, but since I am a non-native student, I thought that my language ability will definitely be an important evaluation factor. So I began preparing for the interview by myself in January 2020 when I came to Japan, little by little. I repeated my method of practice once a week, reading the interview script aloud and trying to make it better. I did this until just before the actual interview.
Such practice helped me to become able to speak naturally, and enabled me to answer what I had prepared smoothly at the interview, instead of simply reading out the memorized text. Rather than rushing to prepare shortly before the exam, I think it’s a good idea to start organizing your thoughts when you have free time, prepare in advance, and practice to speak like your mother tongue.

Compared to the time when you just entered Tokyo Galaxy Japanese Language School, your Japanese has improved tremendously. How have you studied so far?
My basic idea is, when you are trying to learn a language, how better you can get will depend on how much time you spend. I learned words and memorized example sentences just like everyone else; maybe I spent more time than other people because I really started from the beginning.
If I were asked if I did anything different from the others, I would say that I tried to think in Japanese, and to make my brain’s thinking part to work in Japanese. Imagine yourself as a computer, and try changing the language setting to Japanese. When you go out and see things, try to recall the Japanese words for them, and learn the word if you don’t know it. Websites like Papago (a translation service) will be a great help. It’s a much more tedious and cumbersome process than you might think, but I think it’s a good way to do it.

Can you name any lesson you have taken at Tokyo Galaxy that was particularly impressive?
The basic class of comprehensive Japanese. When I looked back, I realized that the whole class was designed like a staircase. Each of its lessons were prepared in accordance with the appropriate Japanese level of the students, and everything was thoroughly arranged.
I participated actively to keep up with the content of the lessons and did my best in everything from quizzes to final exams, and also my homework.
The basic classes at Tokyo Galaxy are carefully prepared in such a stepwise fashion, so if you keep working hard, you will eventually reach the point where you will find yourself using Japanese naturally.

Please tell us the reason you decided to enroll in Tokyo Galaxy.
When I set my goal of entering Ecole de Patisserie de Tokio, I made some search on the Internet and found out that the acceptance rate of Tokyo Galaxy students was overwhelmingly high. The fact that they had an office in South Korea also reassured me; I thought that it’s a reliable school.

What kind of school do you think Tokyo Galaxy is?
I usually don’t invite anyone to do something even if I like it, but studying at Tokyo Galaxy shouldn’t be a bad choice at least, especially if you are aiming for Ecole de Patisserie de Tokio.

Please give some advice to your juniors who are still in their home countries and are aiming to go on to a vocational school in Japan.
I think that the best thing to do is to study Japanese as much as possible in your home country before coming to Japan. There remains the issue of being able to pass the entrance exam for the school of your choice, but apart from that, the range of experience during your study abroad greatly depends on your Japanese level when you come to Japan.

We know that you had never anticipated your study abroad in Japan to be in present condition, influenced by the Covid-19 pandemic. Tell us how you have been coping with the condition.
I was rather thinking that it was an opportunity. Since I couldn’t go out from home at all, I thought that leaves me one choice, to study at home. During the time when school classes were held online, I studied more than 10 hours a day. My efforts at that time made me to step up to the advanced Japanese class, and I also think it helped me to deal with the interview test at Ecole de Patisserie de Tokio.

Mr. Baeck told us in detail about his life in Japan and his gaining admission to Ecole de Patisserie de Tokio. We would like to congratulate him again on achieving two big goals in 2020, improving his Japanese ability and passing the admission selection of the school of his choice.

He has already been accepted at Ecole de Patisserie de Tokio, but there are still many things that can be learned at Tokyo Galaxy Japanese Language School, such as the Optional Subjects Curriculum and the Cultural Communication Class. Studying all the way to graduation will definitely help him when he starts his classes at Ecole de Patisserie de Tokio.

We would like to thank him for the interview.