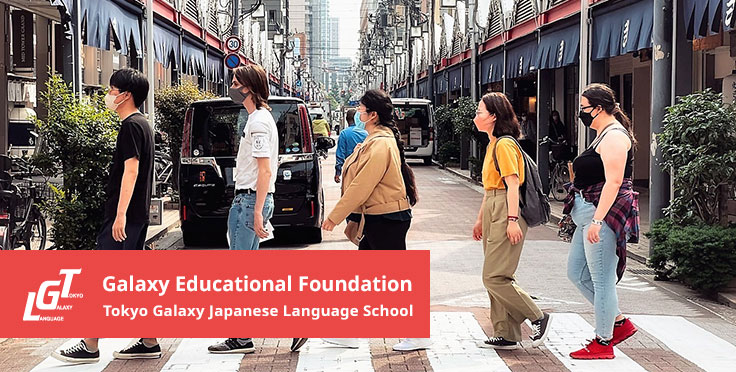 The long-awaited field trip was held as a school event for the first time in a long time. Up until the day of the event, there had been a long spell of rain in Tokyo, but it cleared up and became a perfect day for orienteering. As we mentioned in the previous article, our students learned about the area they were going to explore in advance, so they were all ready to go. Not only students with a cheerful personality, but also students who are usually a little quiet arrived at school this day with a happy face, obviously excited.

We have said that orienteering was something like a doing a treasure hunt as a sport like marathon, competing for time, but Tokyo Galaxy’s orienteering was not that kind of competition. The objectives of this event was to work as a team, to explore the town while completing the assigned tasks, and to get to know your classmates better. However, we had some awards to be given to the teams that did especially well.

The students are all excited to start off the orienteering, aiming to win an award.
Off we go!

Students were handed a “mission sheet” which was a list of the assigned tasks of the orienteering, and they walked to the place in which they were supposed to complete the task. For example, in the case of the team going to Nihonbashi, the first task was to take a group photo at Reiganbashi, the bridge closest to Tokyo Galaxy, and send it to their teacher. When the task was completed, they could move on to the next location.

The tasks on the list were not only taking pictures on the move, but also answering some quizzes related to the location. The Tokyo Stock Exchange, Japan’s largest financial trading facility (buying and selling stocks and bonds) is located in Nihonbashi, and the quiz given here was “how many entrances are there in this building?” Students had to count the number of entrances, take photos to prove it and send them to their teacher.

At the end of the list, there was a task to summarize their impressions of the town they explored into a “senryu”. Senryu is a short poem like haiku, made up of seventeen syllables in a 5-7-5 pattern. A kigo (seasonal word) is essential in haiku, but not in senryu, so you can write a senryu more freely. Some students wrote senryu about the beautiful scenery and fun memories with friends, while others expressed their candid feelings, being tired from walking so much.

It was certainly a very hot day because of the good weather. Students were sweating through the day, walking around the towns that still retain the atmosphere of the Edo period, to complete their tasks and they were able to deepen their friendship by working with their teammates. When they came back to school after the orienteering, they were fussing over the hot weather and the difficult tasks, but they had a content look on their faces. They seemed to have enjoyed the experience of visiting the places they have learned about.

Studying Japanese is not so easy, but Tokyo Galaxy Japanese Language School offers many opportunities to improve your Japanese while having fun at school events. Our students were able to deepen their friendship through the orienteering event, and we are hoping that they will encourage and help each other when they have difficulties in studying or job hunting.