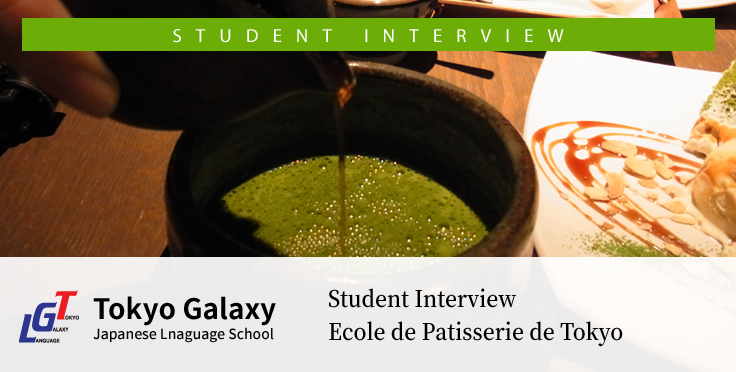 Ms. B decided to study in Japan in order to enter Ecole de Patisserie de Tokyo, and she had been studying earnestly at Tokyo Galaxy Japanese Language School. Now she has successfully passed the entrance exam for the Confectionary Course of Ecole de Patisserie de Tokyo. She studied hard for a long time and did her best to go on to her school of choice. We heard from her about how she had been preparing for the exam.

Please tell us what kind of preparations you have made to pass the entrance exam.
I made my decision to go to Ecole de Patisserie de Tokyo around September 2018. Since I had never studied Japanese at that point, I started to learn Hiragana in September and took basic class lessons at a language school in South Korea from October.
The qualification for the applicants of Ecole de Patisserie de Tokyo includes Japanese Language ability of JLPT N2 level at minimum, so I was studying with the aim of passing the N2 level test.
I was planning to start studying at Tokyo Galaxy Japanese Language School in April 2019, so it was a must for me to improve my Japanese level before that to be comparable to JLPT N3. I did not take the N3 level test, but I studied in Korea at basic class for four months and N3 preparatory class for a month. Then I came to Japan in April 2019 to enter Tokyo Galaxy.
Fortunately, I was able to get enrolled in the Accelerated Learning Class of Tokyo Galaxy, which was designed for students aiming to pass the N2 level test. So, I started my preparation for the JLPT held in July 2019 by attending school lessons and also studying by myself.

Would you tell us the key to your success on the entrance exam?
I was lucky enough to be nominated as a recommended student of designated schools. I was expecting to enter the school through the general recommendation system; however, I had the fortune to be selected by Tokyo Galaxy as their recommended student.
My efforts to improve my Japanese proficiency, in order to pass the N2 level test, has worked in a positive way, I guess.
I think it was helpful to have been able to know the conditions desired by Ecole de Patisserie de Tokyo (such as language ability of JLPT N2 level or higher, ability to handle interview questions, etc.) and concentrate on preparing to meet such conditions.

What was your reason for choosing to start your study in Japan at Tokyo Galaxy Japanese Language School?
I chose Tokyo Galaxy without hesitation since it was the designated language school of Ecole de Patisserie de Tokyo. The majority of students from overseas entering Ecole de Patisserie de Tokyo are graduates of Tokyo Galaxy Japanese Language School. Therefore I thought that I would be able to gain much information about the school of my choice. I had a talk with people from Tokyo Galaxy at a promotion event of studying in Japan held in my country, and decided to study here.

Which classes at Tokyo Galaxy were meaningful to you?
The lessons of the Accelerated Learning Class were really helpful. I was able to greatly improve my Japanese by this class; its lessons include everything you need to acquire to pass the N2 level test of JLPT.
Among the optional subjects, Ms. Sato’s lecture on keigo (Japanese polite expressions) was particularly helpful for me. What I learned there helped me a lot with the interview test and at my part-time job.
I am currently taking Ms. Matsukawa’s Japanese-Korean interpretation class, and I like it very much. It’s interesting and meaningful.

Who is your most memorable teacher at Tokyo Galaxy Japanese Language School? Is there anyone special that you think you won’t forget?
I’ll always remember all of my homeroom teachers and the other teachers with whom I have spoken often. Still, I would like to name Ms. Nakahashi, my entrance exam trainer, and Ms. Kaida, who was in charge of students aiming to enter Ecole de Patisserie de Tokyo, as the ones who have helped me the most.
Of course I received support and encouragement from many other teachers, so I think I will remember them all.

What kind of difficulties did you face while you were preparing for the entrance exam of Ecole de Patisserie de Tokyo? We also like to know how you managed to overcome them.
There were so many people planning to apply to Ecole de Patisserie de Tokyo this year, and that made me pretty nervous. I was not worrying so much about it at first, but after learning that there were quite a lot of students who wanted to go to Ecole de Patisserie de Tokyo, I came to think that I might not be able to pass the exam.
Then I was informed of the exam to select the students to receive recommendation as candidates from designated schools. I heard that the level of the exam would be equivalent to level N1 of JLPT, so I thought no chance for me, but I was just yearning to receive a recommendation and tried to work really hard to get it. My efforts enabled me to score well in the reading comprehension test, and I was able to get good results in the selection exam.

What are the situations that make you feel satisfied about coming to Japan?
I think that in Japan, people are being more unique in their own way, compared to the people of my home country. And that makes everything, such as clothing, desserts, art and other things to be unique as well.
You can enjoy a wide variety of such things in Japan. I think it’s really nice that there are so many enjoyable places in Japan like art museums, cake shops and restaurants that offers various sweets.

Tell us why you chose Ecole de Patisserie de Tokyo among various Japanese vocational schools.
The school has a high reputation, and I thought that there will be much to gain. I met the teachers at their open campus event, and they were all so nice. I was majoring in other subjects, so it was the first time for me to meet the instructors of confectionary art at Ecole de Patisserie de Tokyo, and I’m glad to be able to meet them.
Since the school is located in Tokyo, I thought that there would be many opportunities besides school lessons to experience things related to confectionery in various places. I also liked the way they teach specific subjects in separate classes.

Would you give any advice to students preparing to study in Japan to enter a vocational school?
There have been some intergovernmental issues that interfere with relations between Japan and my home country, but I believe that if you are really wishing to study culture, arts and technology of Japan, you should stick with your conviction.
After coming to Japan, I have realized that the cultural exchange activities between our countries are being somewhat interrupted due to such political issues. Your perspectives will be renewed when you move to Japan and start to study and work here, and you will be able to find out what you can learn from Japanese people and know the ways of their thinking. So I advise you to continue your preparation with confidence.

What kind of objectives do you have in mind as you are going to start studying at Ecole de Patisserie de Tokyo?
The first thing will be to absorb as much I can from the school lessons; however, the bigger goal for me is to create my own brand. I know that I will be able to learn quite a lot Ecole de Patisserie de Tokyo, so I want to enrich my experience by communicating with my teachers and my classmates, and find out what I can create as my original piece of work.

We like to congratulate Ms. B on successfully passing the entrance exam for the Confectionary Course of Ecole de Patisserie.
She has always been participating actively in her classes and making constant efforts, and we know that her road taken to get here was not always easy. We think that her strong will, which enabled her to set and attain goals step by step, such as reaching N3 level of JLPT, then passing the N2 level test and finally being selected as a recommended student, deserves great admiration.
Ms. B will be a role model for those aiming to go on to Ecole de Patisserie de Tokyo, and we would like to thank her again for giving us detailed information on how she studied.
We are supporting everyone preparing for interview tests at Ecole de Patisserie de Tokyo, and those preparing to study abroad. We hope that you do your best and get good results!